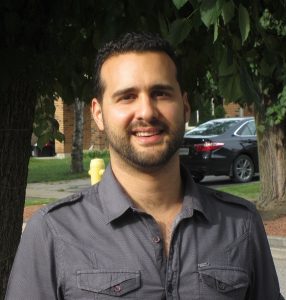 I’m an IT nut who’s been working in the industry since my parents brought home a 386 personal computer, armed with 1 MB of RAM and a 40 MB hard drive. I now work as a cyber security consultant specializing in SIEM technology and security operations.

I’m an avid science fiction fan, having been hooked on it from watching Star Trek and Cosmos reruns with my father as a kid. When my kids aren’t hogging the TV with Treehouse or when I’m able to stay up after they go to bed, I’ll try to catch an episode of Ancient Aliens or Through the Wormhole.

I was fortunate to grow up in a family that values good food. My grandparents taught me how to grow a tomato plant taller than I am, and how to bake a pizza in a stone oven. My mom religiously made the “Sunday Sauce” and ensured there was never the disaster of there being no leftovers.

I don’t have much time to play them anymore, but I’m a huge video game fan. Video games have come a long way since the 8-bit Nintendo, and I had to stop playing in general after Diablo 2, where I’d lose track of time and lookup a while later to realize it was almost time for work. My favourite games of all time are the Super Mario, Metroid, Zelda, Warcraft, Diablo, and Resident Evil Series.

I follow all of the Toronto sports teams, including the Maple Leafs, Raptors, Blue Jays, and TFC. My favourite soccer team is A.C. Milan. I’m an off-and-on martial artist, where every year “is going to be the year” I return to practicing it. My favourites are Muay Thai and Brazilian jiu-jitsu.

As far as music goes, I usually listen to the popular stuff on the radio. Once in a while I’ll pop in an older Tragically Hip, Metallica, 90s house or hip-hop album, or if I feel like singing, an Andrea Bocelli album. I love to sing, but whatever you do, don’t ask me to do it, because you’ll regret it. (I love to sing, and it’s horrible!)

I was born, raised, and still live in Toronto, Canada. Through school and work I’ve lived in New York, Chicago, Boston, Vancouver, Montreal, and Milan, but ended up settling back where I started.

That’s me just before you fell asleep. My site will focus on my interests of technology, business, health, education and self-development.