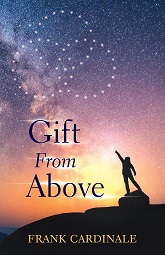 Could an extraterrestrial teach a boy, in an hour and forty-six minutes, more than he learned in the classroom?

Top university graduate Andy Milton lands his dream job with one of the world’s fastest-growing engineering companies led by Wally Smith, one of the world’s most admired CEOs. But even before his first week on the job is over, Andy makes one of the biggest mistakes of his life, and the embarrassment spreads throughout the company, all the way up to the CEO. Andy believes his much anticipated career is already over when Wally Smith demands he report to his office the following morning.

However, Andy is shocked to learn that Wally doesn’t intend to fire him at all, and even more surprised to learn that Wally Smith isn’t what he appears to be. Wally offers his story, but warns Andy that he will not believe it, and jokes that if it were to get out, Wally would be the laughing stock of the company—not Andy. Little did Andy know that by the end of the conversation his life was about to change forever.

What is the book about?

Gift From Above is a fictional story that highlights some of the problems in the education system. It’s about a young boy who was passionate about learning, but did not fit in well at school. After problems began brewing at home, he ran away, and when he ended up where he least expected, he received an unforgettable education from someone he could have only dreamed of.

What was the motivation behind the book?

I did poorly in school as a child, and while my teachers were awarding me bad grades for messy handwriting and the inability to pay attention for more than ten minutes, they were bringing in their computers for me to fix. I was twelve years old, barely passing, while showing them how to use their computer and write basic programs.

I didn’t think anything of it until I graduated from university, when I realized I wasn’t any less “intelligent” or inferior to my classmates. As a child, I simply had no interest in writing neatly or being lectured for hours a day, and was instead interested in typing sixty words per minute, BBSes, and the Internet. But as result, I felt inferior for no apparent reason other than being graded on something that didn’t interest me.

Sadly, this problem continues today, where we put all students through a highly standardized education process, which for many isn’t a good fit. Those students who are not a good fit for the system become demoralized and feel incompetent, when they simply should be pursuing education outside the system, such as early specialization, more hands-on learning, or simply following a different education process.

How did a science fiction book end up talking about the problems with the education system?

Sometimes being pulled out of our daily routine or experiencing something unexpected can have the most profound effect on us. As a new author, I didn’t think writing a book for the education category on Amazon or the local bookstore was the best format, as I don’t have a background in education that a teacher would have. There are also countless self-help books, and I didn’t think a step-by-step instruction manual was the best format either. Typical formats also go against one of the main points of the book, that we sometimes need something outside the typical systems that we interact with, as we’re all unique individuals. I combined two of my favourite genres of books, science fiction and self-help, and came up with a story about a struggling young boy that is brought out of his day-to-day experience to receive an unforgettable education.

What can we do to fix the education system and provide our kids the best education possible?

The education system is a highly complex system, and is still effective at teaching basic reading, writing, and math skills. I like the public school my children attend and think the teachers are excellent. However, it doesn’t teach you many other skills that are required in today’s workforce.

The people best able to teach our children are parents and teachers, as they’re closest to the students and can see problems arising with them best. However, teachers are limited in the methods they can use to teach their students, and have many rules, regulations, and standards that they must follow. Additionally, teachers have several dozen students to teach at once, and don’t have the time and resources needed for some students.

Even with this being the case, there are many things we can do to compliment a child’s education. As busy parents in the modern rat-race, the last thing we want to hear is that we need to do more work, but the good news is that there’s more resources than ever to compliment the education system. There are a tremendous amount of low-cost, high-quality online videos, workshops, personal tutors, hands-on and other general independent methods. I am where I am today from the reading, writing, and math skills I learned in the education system, computer/IT skills from the personal computer my parents bought for $4,000, my post-secondary education, and hard work, determination, and other soft skills learned from business and self-help books.

In addition to learning in new methods, we should consider when to attend school, especially post-secondary. There’s no need to rush into attending post-secondary education right after high school. This has resulted in many students studying something that they’re not passionate about, assume large debts, and emerge in a position little greater than which they entered.

We should also stop pursuing a post-secondary education for the sake of obtaining a piece of paper, and instead obtain one because we want to learn something. Use return on investment to determine if the education is right for you. The return can be your desire to specialize in the subject or it can be the financial return it can bring you. Telling our kids they’ll succeed by simply obtaining a piece of paper is setting them up for failure. I know many who obtained a post-secondary education and had the same job prospects upon graduation as they did without the degree. In four years they spent $160,000 Canadian dollars on their education ($40,000 in tuition and $120,000 in wages they could have made working) and came out with $20,000 in student loans. I highly recommend a post-secondary education, but think it should be based more on return on investment (either financial or personal return), and don’t think one should take it simply because they feel the need to pursue one immediately after high school. I began university at 21, and had I done it at 17 it would likely have ended badly. I simply wasn’t ready at 17.

The book is available through Indigo, Amazon.ca, Amazon.com, and other book retailers. If I haven’t convinced you to get it from what I’ve written above for whatever reason, please email me at frank@frankcardinale.com for a complimentary copy. I’d also love to hear from you with your thoughts on the book. Thank you for your interest!